Just how good is the x86 cmov instruction?


Suppose you want to write the following code inside a performance critical loop:

where foo is a local variable (of some simple type, like int), and bar is either a local variable, or a simple memory location (such as A[i]). Such a code is likely to be found for example in a Kadane's algorithm implementation.

There are two standard ways for an x86-64 compiler to translate this conditional into Intel assembly, namely a cmov instruction, or a conditional branch paired with a regular mov.

To make this example more concrete I will focus on this particular code:

GCC version 4.8.2 emits the following code for the if at -O3 (gas' assembly notation):

To make this example more interesting let's feed the compiler with more data. GCC (and others probably too) implements a mechanism allowing the programmer to specify that a condition will likely/unlikely be true during the runtime. In our case it would look like this (assuming that we are expecting A[j] to be generally false):

We are of course free to put 1 in the place of 0 whenever we expect A[j] to be true most of the time:

And the corresponding GCC output (note the speculative movl execution!):

This way we obtain four versions of the program which I will call cmov, branch, branch_0 and branch_1. One might ask why there is no cmov_0 and no cmov_1, but it is due to the fact that in cmov's case the compiler ignored the likely/unlikely hints.

The point of this excercise is to measure their execution speed, but this of course depends on the contents of the A array. So let's fill it with random independent identically distributed zeros and ones, manipulating the probability of one (the probability that the if's condition will be true).

These are the results I obtained on my machine. It is the execution time, so the lower the better: 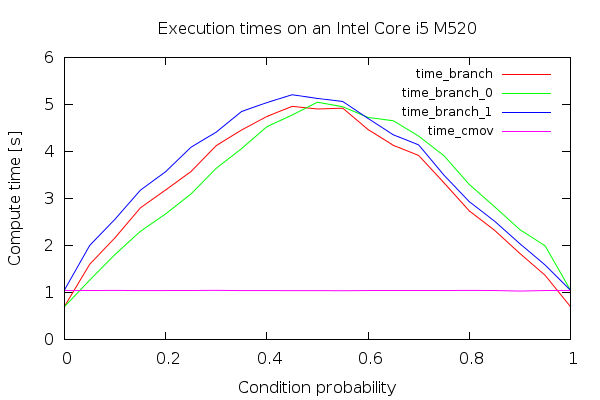 Three interesting facts can be read from this plot:

The "visual proof" for the third fact: 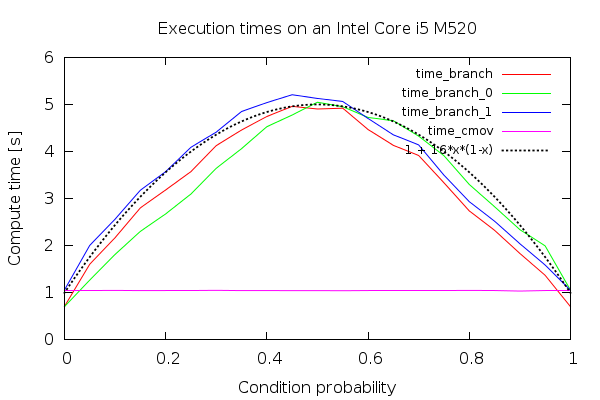 To conclude, GCC emits cmov by default, and it seems like a reasonable choice, at least on my Intel Core i5. However, it is not the optimal solution for stable, predictable conditions.